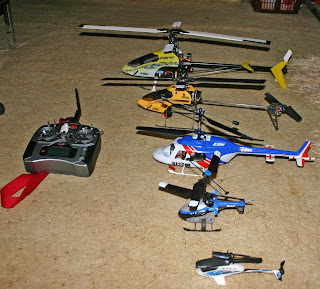 Bill has taken up the hobby of flying remote control helicopters. About ten years ago he flew RC airplanes with a local club. The attraction of the helis is that he can fly them just about anywhere. The smaller three fly indoors and the two big ones fly in the back yard or at a local park. At first the hobby can be frustrating since it is easy to crash and you spend a lot of time and $$$ repairing your mistakes. Eventually you get the hang of it and Bill enjoys flying circles, figure eights and just plain hovering around.
Posted by Bill and Debbie at 2:22 PM No comments: 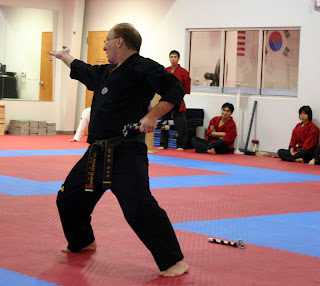 Bill survived a three and a half hour final test for his 2nd degree Blackbelt in Tae Kwon Do. This was the last of six tests required. He had to perform 12 forms or katas, a creative nunchuk routine (set to Jimi Hendrix "Voodoo Child") and a knife self-defense skit demonstrating twelve different defenses to a knife attack. He had to full-contact spar against two opponents. He ended the test by breaking double boards held only on one edge with knife hand, punch, side kick and turning hook kick. His jump break was to break a board with a round house kick and another with a turning side kick all in the same jump. Finally his power breaks were three cinder blocks free-standing with a hop step side kick, a cinder block with a drop kick and one with a turning side kick. Now he is looking forward to learning fighting techniques with the Bo staff.
Posted by Bill and Debbie at 2:46 PM 1 comment:

This is our first blog. 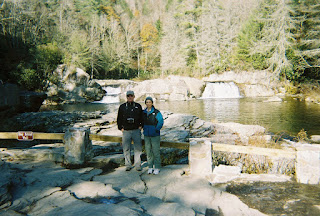 This is just to test out our attempt to start a blog so that friends can track our travels and veiw our photos. Here's recent photo taken at lower Linville Falls in western North Carolina.
Posted by Bill and Debbie at 6:31 AM 1 comment:

Bill and Debbie
Raleigh, North Carolina, United States
We are retired and spend several months each year traveling in our truck camper to places where we can hike, bike and kayak and the rest of the time we do other stuff like yoga, Brazilian Jiujitsu, RC airplanes and helicopters, cooking and reading.